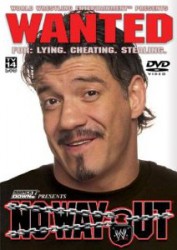 It’s about that time again, your weekly dose of wrestling’s past: Throwback Thursday. October 9 is a little bit sparse in terms of wrestling moments, but of those few, it does include some big ones; from the birth of WWE legend Eddie Guerrero, to a Cruiserweight Championship victory for Billy Kidman, to Kurt Angle’s debut in TNA.

However, of the potentially great visual moments from this day—maybe not Eddie’s birth so much—the WWE Network is a little light on events from this day. With this in mind, and in memory of Latino Heat, we turn instead to February 15 and the 2004 edition of No Way Out.

The quick results are as follows: Rikishi and Scotty 2 Hotty defeated The Basham Brothers and Shaniqua in an intergender handicap match to retain the WWE Tag Team Championship; Jamie Noble defeated Nidia in a match where Noble was forced to be blindfolded; The World’s Greatest Tag Team defeated The APA; Hardcore Holly defeated Rhyno; Chavo Guerrero (with Chavo Classic) defeated Rey Mysterio (with Jorge Paez) for the WWE Cruiserweight Championship; Kurt Angle defeated United States Champion Big Show and John Cena in a triple threat match to become number one contender for the WWE Championship; and Eddie Guerrero defeated Brock Lesnar to win the WWE Championship.

Usually when I write the quick results above, I add in something a bit snarky just to make fun of the wrestlers and their characters. However, as you can see, these results have no snarky comments or nicknames, and that is a reflection of the event itself. Although there were a few goofy moments (for example, Sable and Torrie Wilson opening the show while unfortunately forgetting to bring any level of charisma with them) the show was very straight to the point.

By this time, SmackDown had garnered a reputation for being heavily focused on its wrestling and athleticism as opposed to Raw’s characters and drama. As a SmackDown event, this pay-per-view followed suit. For example, the match between Hardcore Holly and Rhyno had virtually zero build up yet still went for nearly 10 minutes. Heck, not even taking into account the half-hour main event saw the average match length at 10 minutes. But still, quantity is only one half of the equation.

Every one of these matches was also of high quality. There were three main events matches with championship ramifications that each went for more than 10 minutes. The brawlers were recognised as such, as were the technicians, as were the high flyers, as were the powerhouses. Nidia showed what a fantastic wrestler she had the potential to be in an early match that was short enough to prevent us seeing how green she still truly was. The Cruiserweight Championship match utilised its managers perfectly. And, although the resulting match would be one of the worst in WrestleMania history, the feud between the Lesnar and Goldberg was built beautifully and in such a way that it still made Eddie look strong.

And speaking of Eddie, he is the man of the hour. He is one of those wrestlers who I am sure does not know how to wrestle a bad match. On top of that, Lesnar was being billed as a monster of a man, not dissimilar to how he is seen today. Eddie was undoubtedly an underdog going in, but we all know Eddie’s philosophy of lying, cheating, and stealing, so it should come as no surprise that he stole the championship with some questionable tactics that made us love him all the more.

Eddie was one of the greatest wrestlers to ever enter a WWE ring – scratch that, to ever enter a wrestling ring. This was a night that showed how one can overcome their demons, how one can fight for survival, and how one can leave a legacy in which fans will continue to search for his work for decades to come. This event is the pinnacle of a career that was all too short.