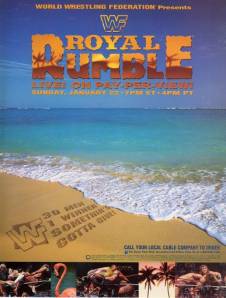 It’s about that time again, your weekly dose of wrestling’s past: Throwback Thursday! January 22 is a day filled with plenty of old history, and by that I mean untelevised or just not on the WWE Network; from the birth of Tully Blanchard in 1954, to Gene Kiniski and Killer Kowalski winning the Vancouver NWA Pacific Coast Tag Team Titles in 1962, to Jumbo Tsuruta defeating Abdullah the Butcher in Japan to win his fourth NWA United National Heavyweight Championship in 1981, to Chavo Guerrero claiming his biggest career victory and beating CM Punk for the ECW Championship in 2008.

However, of the potentially great visual moments from this day—maybe not Tully’s birth so much—we will again focus on the match currently on everybody’s mind: the Royal Rumble. This specific day hosted the 1995 rendition of the Royal Rumble.

The quick results are as follows: Jeff Jarrett (with The Roadie and an unnecessarily flashy hat) defeated Razor Ramon (with a toothpick) to win the Intercontinental Championship; The Undertaker (with Paul Bearer and the all-powerful urn) defeated Irwin R Schyster (with Ted DiBiase and the not-so-powerful Druids); Diesel fought Bret Hart to a draw and retained the WWF Championship; Bob Holly and 1-2-3 Kid (with plenty of spark) defeated Tatanka and Bam Bam Bigelow (with Ted DiBiase) to win the vacant WWF Tag Team Championships; and Shawn Michaels won the 1995 Royal Rumble match by last eliminating The British Bulldog.

This was in the middle of what WWE at the time coined “The New Generation”. Frankly, it’s not too dissimilar to the generation we are currently in. It was an era where the company couldn’t really tell if it wanted to focus on storylines or wrestling, and everything was quite jumbled and cartoonish. However, that didn’t ruin this event in the slightest. In fact, it may have been what made it good.

I think the first match provides a great example of how weird the wrestling world had gotten. Jeff Jarrett was a talented up-and-coming wrestler while Razor Ramon was an established star in the contemporaneous World Wrestling Federation. However, neither man focused entirely on wrestling ability. Both men had magnified themselves into specific characters: one, a cocky and flamboyant musician; the other, a self-confident strongman. These are both very simple characters at first, but the two added their own nuances to them. Jarrett had his strut and Ramon had his swagger, Jarrett had The Roadie and Ramon had his toothpick. These small details added hugely to the characters while their wrestling ability kept the fans interested.

Also different and lacking concreteness were the rules. No longer was it a disqualification to throw a man over the top rope, it was now celebrated. And two matches proved how championships can alter matches completely. The Intercontinental Championship match was restarted at the demand of the in-ring competitors following a count-out victory for Jeff Jarrett. Jarrett could only win the title by pinfall or submission and so lured the injured Ramon back into the ring with both deciding that a definitive finish needed to be made.

The second match where rules went out the window was the WWF Championship match. However, this was not at the choice of the wrestlers, but at the choice of the referee. Despite numerous interferences and Bret Hart cheating the entire match, it wasn’t until both athletes were being beaten down by other enemies of theirs that the referee determined the match was a draw.

On to the main event of the evening, we saw a brilliant match between two fantastic wrestlers. Shawn Michaels and The British Bulldog were the first men in the Royal Rumble match. About half way through, everybody else up to that point had been eliminated and they were the only two again. At the very end of the match, it was down to these same two competitors. It was very rare that either of these men got a break throughout the match, and it could be argued that Michaels was the one who took advantage of breaks more often. In typical Michaels fashion, especially of that time, Michaels managed to weasel his way to victory through a loophole in the rules. When British Bulldog thought that Michaels had been eliminated, he turned to celebrate as his music played triumphantly. But only one of Michaels’ feet had touched the floor and he was able to re-enter the ring without Bulldog’s knowledge, push him from the turnbuckle to the floor, and celebrate in victory.

If you want to compare it to anybody today, one just has to look at Seth Rollins: a crafty man with wit beyond his years and a cunning that leaves him championship-bound. Michaels did not care that his victory could be seen as tainted, he cared about winning and cementing his name in the annals of history. Michaels went in first, was the last man standing, and is still talked about two decades later for this very match. This may have been a strange time in wrestling, but it had some bloody good moments.