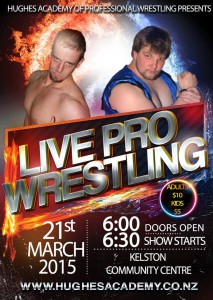 Twenty-nine names from around the country have been announced for the Inter-Promotional Rumble at tonight’s Hughes Academy Live Pro Wrestling event.

The winner of the match will receive a shot at the Hughes Academy Championship, currently held by Charlie Roberts.

The Inter-Promotional Rumble will be conducted in a similar way to WWE’s Royal Rumble. Two competitors will start the match and others will join via a staggered entry system at pre-determined time intervals. Eliminations take place when a wrestler is thrown over the top rope and both of their feet touch the floor. The last man—or woman—standing will be declared the winner and number one contender to the Hughes Academy Championship.

Any of the 29 announced entrants could be the victor due to the nature of the Inter-Promotional Rumble, but early favourites include Jackson Shield holder Kingston Eclipse, KPW Women’s Champion Frankie Quinn, Hughes Academy head trainer Graham Hughes, and He Toa Cup Champion Chad Howard.

Depending on entry order, Howard may be the odds-on favourite to win with fellow Rodeo Drive members Bryant and “The Natural” Steve Jordan also entered into the contest. However, should any of the aforementioned three take the win, a shot at the Hughes Academy Championship held by Rodeo Drive’s own Charlie Roberts could cause cracks in the group’s otherwise unified front.

Roberts will be on hand this evening to watch the Inter-Promotional Rumble, and offer his opinion of the match earlier in the night.

Hughes Academy Live Pro Wrestling takes place tonight, March 21, at the Kelston Community Centre in Auckland. Doors open at 6pm with the first match scheduled for 6.30pm. The card, subject to change, is listed below.