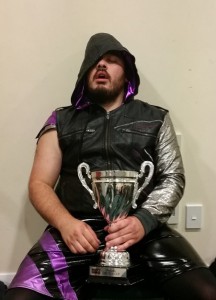 Chad Howard has won the Right 2 Challenge contract and a shot at the NZWPW Championship.

“Four down and new Right 2 Challenge contract holder,” he posted on Instagram. “Finally get my chance to get the NZWPW heavyweight championship.”

Howard’s win was not without controversy. It could be argued the He Toa Cup holder stole the win thanks to interference from his Rodeo Drive stablemate, Bryant, and NZWPW Champion “Dream Catcher” Phil Woodgate.

Bryant entered the ring to stun James Shaw with his signature Viper Room slam. Rodeo Drive’s enforcer then dragged Shaw back to his feet and held him in position while Howard lined up a discus elbow for the IPW Champion.

Shaw broke free from Bryant’s grip and watched as Howard collided with his tag team partner, before spraying green mist into Bryant’s face to render him useless for the remainder of the match.

Shaw followed up with a DVD for Howard, when NZWPW Champion “Dream Catcher” Phil Woodgate suddenly entered the ring.

Dream Catcher swung his belt at Shaw and Rufguts’ heads, knocking both men down and leaving himself as the only man on his feet.

That soon changed when Ben Mana—who lost his qualifying match against Rufguts thanks to interference from Dream Catcher—took Woodgate down with a Maori Spike.

As the ring cleared, Chad Howard dragged himself on top of Rufguts (who was still down from being hit with the NZWPW Championship) and scored the pin, picking up his first Right 2 Challenge victory.