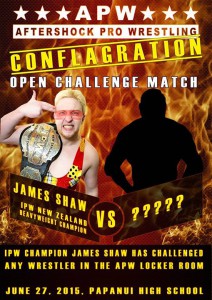 James Shaw ventures to Christchurch next weekend and, as of tonight, now he knows who his opponent will be.

Shaw, the IPW Champion, issued an open challenge to anyone willing to step up at APW Conflagration (Saturday, June 27) and face him in a non-title bout.

While several members of the APW roster volunteered to take him on, Shaw grew frustrated with vague responses from T-Cole, who would neither confirm nor deny whether he planned to answer the open challenge.

“You’ve messed me around far too long,” Shaw told T-Cole. “If you’re gonna hint at fighting James Shaw you’d better be ready to fight James Shaw, so I am throwing down the challenge to you … do you accept it?”

After being called out directly, T-Cole has accepted Shaw’s challenge and will meet the IPW Champion in the Conflagration main event.

“James Shaw, thing is, I’ve already won, I’ve got you going crazy knowing that I’m aware of your challenge but I haven’t quite given you an answer yet,” T-Cole said. “Don’t you just love when people play in your head like that? But here’s the thing, James, here’s my moment of kindness, I’m going to break that madness and give you my answer right now: James Shaw, I accept your challenge.”

Both men now have five days to prepare for their bout this Saturday, June 27.