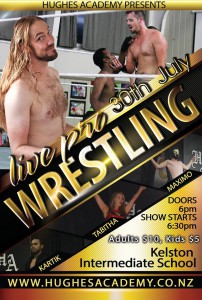 Kenith and Tabitha rule atop the Hughes Academy roster with a tight grip on their Hughes Academy Championships. But Devin Lockhart may have found the key to dethroning them.

“Frankie Quinn was my debut opponent and she was also the first wrestler to beat me after a very fun winning streak,” Lockhart told NZPWI.

“Honestly, I couldn’t have been happier to have lost to such an awesome competitor! If we can have as much fun as a team as we’ve had as opponents, then there’s a chance we could be a force to be reckoned with!”

Kenith and Tabitha will be desperate to shut down their opponents in tonight’s non-title encounter, Lockhart said. A win for the power couple will almost certainly send Lockhart and Quinn to the back of the queue for title contention.

While careful not to look past tonight’s tag team contest, Lockhart remains optimistic for another shot at the Hughes Academy Championship.

“As much as I respect Kenith and his in-ring ability, I did come scarily close to defeating him and capturing that title. I’m sure they will try anything to make sure I’m not in that position again.”

Lockhart believes a victory tonight should lead to another shot at the Hughes Academy Championship, and a title opportunity for Frankie Quinn as well.

“Frankie deserves a shot at the title for sure,” he said. “A win for us would hopefully help the powers-that-be see that.”

Hughes Academy Live Pro Wrestling takes place tonight, July 30, at Kelston Intermediate School in Auckland. Doors open at 6pm with the first match scheduled for 6.30pm. Tickets are available on the door ($10 adults, $5 children). The card, subject to change, is listed below.