Fans of Total Divas rejoice! The Bella Twins are back on New Zealand screens tonight for the premiere of Total Bellas.

The six-episode series follows Brie Bella and Daniel Bryan, and the rest of the Bella family, as they move into John Cena and Nikki Bella’s house to help Nikki recover from neck surgery.

With five seasons of Total Divas under their belts, Brie and Nikki were used to being followed by a camera crew in their day-to-day lives. But the demands of reality television were relatively new for the Bellas’ significant others, Bryan and Cena.

“They actually both were very excited to do the spin-off,” Brie told NZPWI. “I’ll speak on my husband’s behalf, Daniel Bryan. He was excited because he’s like, ‘Finally, I get to have my own perspective on the show and finally people will hear from me.’ And you do. On Total Bellas you get to see and hear Bryan in the interview chair. You get to go through life though his eyes and you’ll see that on the show.”

Despite the show’s name, Total Bellas will be every bit as much about Daniel Bryan and John Cena. Cameras were rolling when Bryan received the news he could no longer perform in-ring for WWE.

“We weren’t expecting that,” Brie said. “He was actually getting ready to go back. When we found out it was the opposite it was crushing and it caught us off guard. It was hard because I didn’t want the camera to be on him.”

It’s not just the camera crews that can be difficult to live with. Living in such close quarters with family—even if they’re in the guest house—means tensions often flare, and certain neurosis are brought to the surface. 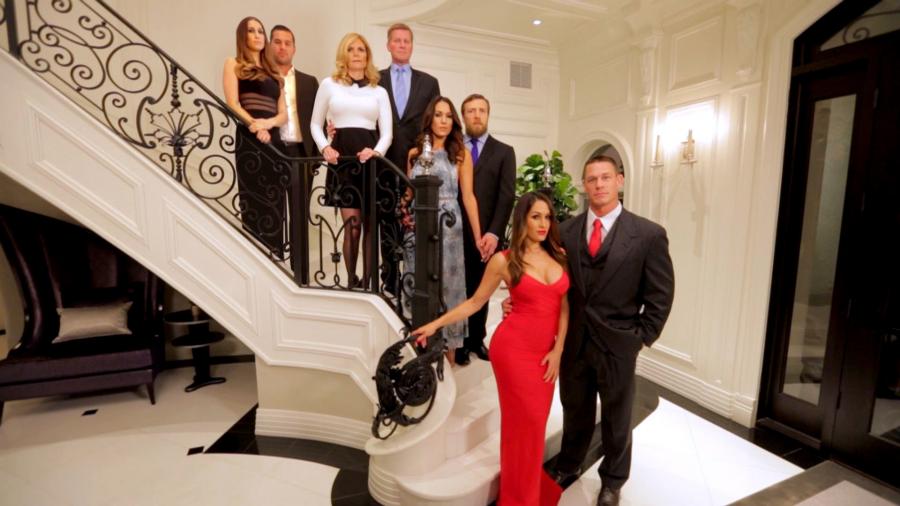 Brie described Cena’s “insane OCD” during the first of many “Downton Abbey-style” dinners.

“Literally, we’re all sitting at the table and Nikki spills a little bit of wine and John got up and grabbed Stain-Away right away. Like, we weren’t even done with our appetizers.”

Not to mention the house rules for Brie, Bryan, and French bulldog Josie at Cena’s Tampa mansion.

“One rule was you had to make your bed before doing anything. Which was really hard on me because I like to roll out of bed, make my coffee, and then—if I feel like it—make my bed,” Brie said.

Other rules include: no shoes in the house, mandatory morning coffee meetings and nightly fireside catch-ups, and the Downton Abbey-style dinner.

“Poor her,” Nikki Bella interjected. “Doesn’t it sound so terrible? Like, I’m being sarcastic.”

For all the dramatic moments caught on camera, the biggest takeaway from Total Bellas is the importance of family, Brie said.

But when it comes to making time for your loved ones, perhaps one month is a little too much?

“I think it’s kinda shocking when you see, like, we get along so great and have so much fun together but how we cannot live together,” Brie said. “It’s really hard on us. After we were done filming we were like, ‘We are never doing this again!’ ”