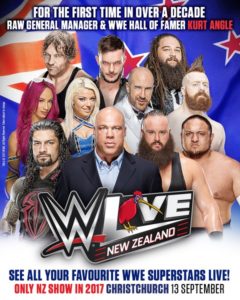 The Raw General Manager will oversee all the action when WWE Live comes to Christchurch on Wednesday, September 13.

Angle was last in New Zealand in March 2006 for the Road to WrestleMania 22 event at Wellington’s Westpac Stadium.

Angle went on to retain his World Heavyweight Championship in a triple threat against Mark Henry and The Undertaker.

Inducted into the WWE Hall of Fame as part of the WrestleMania 33 weekend earlier this year, Angle returns to New Zealand as the Raw General Manager, ready to oversee some big match-ups.

Braun Strowman and Roman Reigns clash in a Street Fight, while a Battle Royal determines who will challenge The Miz for the Intercontinental Championship.

Limited tickets for WWE Live are available from ticketek.co.nz.

For the first time in over a decade – #RAW General Manager & @WWE Hall of Famer @RealKurtAngle LIVE in New Zealand! https://t.co/bx9UVzs5Bh pic.twitter.com/F2F7XOhGTy