When Drew McIntyre began wrestling at 15-years-old, he had to travel 12 hours from his home in Scotland to find training. The Scottish pro-wrestling scene was non-existent, and England only had two independent promotions.

Now, January 2019 has punctuated a boom in the United Kingdom with the opening of a WWE Performance Center in London and an NXT UK TakeOver: Blackpool special streamed live around the world on WWE Network.

“I am just glad that the UK scene is healthier than it’s ever been and is probably the number one independent scene in the world right now,” McIntyre told NZPWI during a conference call before WWE Royal Rumble.

“Now the WWE has got involved it’s just got bigger and bigger and now … you have the Performance Center—a direct link to WWE. When I was moving to America I was cherry picked and dumped in America, it was such a culture shock, it was hard to adapt. Now the process is seamless. They couldn’t have picked anywhere better to put a Performance Center than right there in the UK.”

McIntyre was the first of a group of UK-based signings (including Sheamus and Wade Barrett) to arrive in the United States in 2007, and quickly appeared on WWE TV. Without a Performance Center where he could adjust to WWE production, and its multitude of cameras, McIntyre was out of his depth.

McIntyre is not the only Raw Superstar to have come from Europe. Universal title contender Finn Balor set social media abuzz when he made a surprise appearance at NXT UK TakeOver: Blackpool to battle Jordan Devlin in an impromptu match during the WWE Network special. Could McIntyre be the next WWE Superstar to make a surprise appearance on NXT UK?

“I’ve already floated the idea that if anything pops up old Drew is needed for, I’d love to go down there, even if it’s not a match, just to talk about the evolution of British wrestling,” he said.

“If I get the opportunity to go back and I get to tell a little history lesson that I watched it all happen and I literally cannot believe how far it’s come, I would love that.” 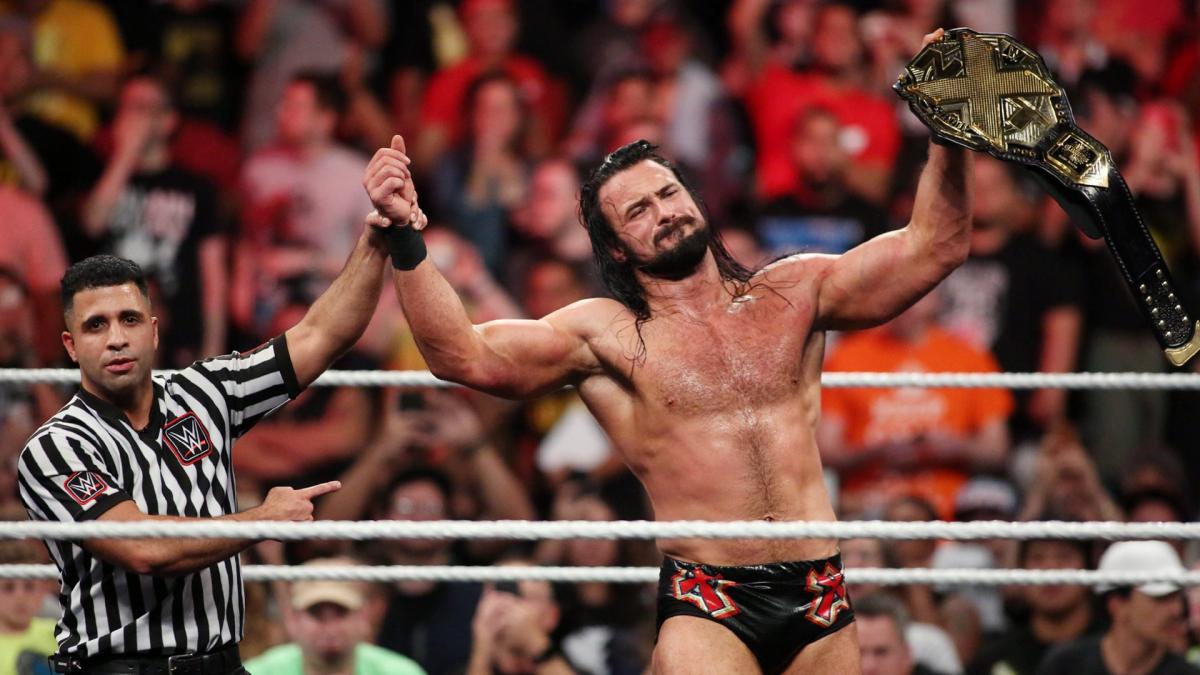 McIntyre has always been passionate about WWE NXT—to the point of requesting he be part of the NXT roster when he returned to WWE in 2017.

“I had a long conversation with Triple H and I made it clear if I come back, I would like to go to NXT first because I’d worked for different companies around the world and made a difference in those companies and helped them grow. NXT is somewhere where talent moves to Raw or SmackDown and then you need those experienced leaders to come in, and that makes a difference to the product. I felt like during that time they’d lost a couple of people and like I could really make a difference going in there. And I just wanted to be part of it because it’s such a cool thing.”

NXT will take centre-stage this Sunday, January 27, for TakeOver: Phoenix before Royal Rumble the following day at the 40,000 seat Chase Field. Major pay-per-view weekends, with Raw, SmackDown, and WWE NXT in the same city, stir up competition between the brands, McIntyre said.

As a former NXT Champion, McIntyre has seen NXT break out of its shell. The brand was once exclusively based at Full Sail University in Orlando, Florida, but now has TakeOver specials in sold-out arenas across North America, and has a presence at many non-WWE events.

“There’s a music festival in the UK called the Download Festival which is one of the biggest music festivals we have,” McIntyre said. “NXT has an act in that. I always said when I was younger, I want to be in a band or I want to be a wrestler, and I got to be on the bill at the Download Festival with all the coolest bands in the world so that was like living a dream in that moment.

“Right now it’s just gone from strength to strength and to see all the TakeOvers, see how good they are, NXT is just on a different level. You can’t call it developmental ‘cause it’s not, it’s its own brand. It’s the third brand, and when you move to Raw or SmackDown you don’t move up, you move across, you get transferred.”