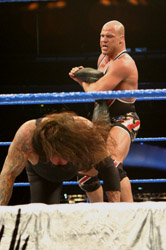 It may have been a chilly evening at Westpac Stadium in Wellington on Saturday night, but the atmosphere was positively electric as the stars of WWE SmackDown thrilled the 20,000-plus crowd in an amazing show.

As the World Heavyweight Champion Kurt Angle made his way to the ring in the main event of the evening, the roars from the crowd would have been heard all over Wellington. As he strode down the aisle, the “You Suck!” chants grew even more deafening as he pointed at one of his opponents, the World’s Strongest Man, Mark Henry, who was accompanied by his sidekick Daivari. As thunderous as Angle’s reception was, it almost paled in comparison to the reaction the Undertaker generated. As the arena went black and the blue lights flashed, the crowd at the stadium came unglued. The Deadman made his traditional measured entrance, bringing up the lights in the arena as he ascended the ring steps and faced his opponents.

Taker and Angle teamed up early on, combining their efforts in an attempt to bring down the huge Mark Henry. No sooner had they managed this than Taker turned on Angle, allowing the champ no time to switch gears. Angle was bounced from the ring by Taker, who then turned his attention back to Mark Henry, who had once again retained his vertical base, and the two titans went toe-to-toe in the middle of the ring.

At this stage, the Undertaker was very much in control of the match, keeping both Angle and Henry staggering in their corners. Eventually Angle gained some ground, catching the Deadman off guard and sending him onto the ring floor. It did not take Angle long to fully gain control of the World’s Strongest Man, and he was soon joined by the Undertaker. Between them they were able to send Henry over the ropes and onto the floor before turning their attention back to each other. Angle managed to cinch in an ankle lock, but Taker reversed it and hit a chokeslam on the champion, covering him for the pin, which got a two count before Henry, from the ring floor, grabbed the referee’s ankles and pulled him through the ropes.

SmackDown referee Charles Robinson was quick to dash in as a substitute and continue officiating. Angle locked his arms around Taker’s waist and turned him upside down for a pile-driver, but Taker managed to reverse the hold, only to be thwarted by a chair shot from Mark Henry. This was noted by the first referee who announced a disqualification.

In other championship action, Gregory Helms retained his Cruiserweight Championship in the opening match of the evening against Jamie Noble and Kid Kash, although for a few minutes it looked as if Kash would have preferred to take on NZPWI columnist and photographer Troy Rawhiti-Forbes, when the pair locked into a nose-to-nose slanging match.

Chris Benoit retained his US Championship against challenger Booker T in a fast-paced and exciting match, ending with Benoit’s triple German suplex sequence, and a sharpshooter which turned into his signature Crippler Crossface, forcing the challenger to tap out.

MNM retained their Tag Team Championship against Brian Kendrick and Paul London, although the challengers dominated a large part of the match and were defeated only after Melina’s interference. 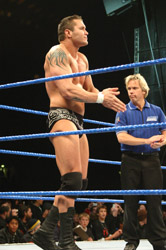 Randy Orton, whilst waiting for challenger Rey Mysterio, shivered and chattered with cold at ringside, seeking warm clothing. For a second it looked as if Rey would offer Randy his T-shirt, but it was a ruse that was enough for Orton to charge the ring and get the match underway. Despite the cold, Orton was clearly having the time of his life, hamming it up in the ring and enjoying a bit of comedy. He was eventually defeated with a clean 619 and Drop of the Dime, after which Rey celebrated in the ring with the NZ fans, everyone remembering the late great Eddie Guerrero with chanting and cheers, conducted by Rey from all four corners of the ring.

NZ fans were also treated to a special fireworks display, the pyro lighting up the Wellington sky.

The atmosphere at the Stadium was almost indescribable, and it was communicated to the SmackDown Superstars who pulled out all the stops for the New Zealand fans who had braved the weather to see their favourite stars in action. The crowd were always quick to bellow their appreciation into the night sky, and with a reception and reaction as positive as it was, we hope that the stars of WWE look forward to a return trip to New Zealand in the near future.