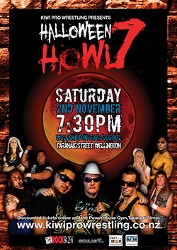 A new KPW Champion will be crowned tonight when former champ Shane Sinclair takes on the impressive Mr Samoa at Halloween Howl 7.

Sinclair held the title up until last year’s Halloween Howl event, where he was defeated by Whetu the Maori Warrior. Whetu then relocated to Australia and, unable to return and defend his title, was stripped of the belt by KPW CEO Rip Morgan.

Having been denied a rematch, Sinclair was KPW management’s first choice for a title shot tonight – but things will not be easy with the undefeated Mr Samoa standing across the ring.

Whoever wins the KPW Championship will be in for a gruelling night, with the true main event of the evening pitting NZWPW Champion Ben Mana and SCW Champion “Rufguts” Roddy Gunn against the winner in a triple threat bout with bragging rights for all three companies at stake.

Mana, coming off a win over Adam Avalanche at last night’s NZWPW Legends Reunion will be especially motivated to win with “Rufguts” Roddy Gunn holding the Right 2 Challenge, a guaranteed NZWPW title match.

Could Rufguts invoke the Right 2 Challenge and leave Halloween Howl as a dual New Zealand Champion?

Can Mana get the win over Rufguts and make him think twice about chasing the NZWPW title?

Can the new KPW Champion overcome the odds and pick up the win in their second match of the night, getting their title reign off to an impressive beginning?

Also on the card, the KPW Women’s Championship is on the line when Nurse Payne defends against long-time contender Scarlett.

It’s been a rocky road to the title for Scarlett, who was denied a title bout at Cossie Carnage 2 when Payne was unable to compete after having donated a kidney.

“I thought I was ready for the title shot in July,” said Scarlett, “but now with a couple of other bouts under my belt I feel like I’m definitely ready to take that title from Nurse Payne.”

Nurse Payne has fully recovered from her operation and is fighting fit to defend her title tonight.

Scarlett and Payne are not the only two women involved in this bout though, Queen Hollie will serve as a special referee to make sure things are called right down the middle – or will she?

Can Scarlett achieve her dream and take home the KPW Women’s Championship, or will Nurse Payne show her tenacity and extend her reign as the beloved titleholder?

KPW Halloween Howl 7 takes place tonight, November 2, at the Wellington High School on Taranaki Street. Doors open at 6.45pm with the first match scheduled for 7.30pm. Tickets are available on the door ($15 for adults, $10 for children). The card, subject to change, is listed below.