Shaw recovered from injury, returns at Nightmare B4 Xmas 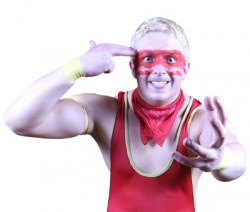 Seconds before making his IPW return at November’s Last Chance, James Shaw was hit with a wave of nerves he hadn’t felt since his first match more than seven years ago.

“I had honestly forgotten that feeling,” he told NZPWI. “I was afraid the audience wouldn’t remember me and just think this new guy in red with red face-paint was debuting.”

Shaw’s appearance—a failed attempt to cost Fury the IPW Championship—came as a surprise to the live audience, and to anyone else who follows New Zealand wrestling. The fan-favourite suffered strained/torn MCL and PCL ligaments in his knees in August this year, and had been expected to be away from the ring until at least 2015.

It only took one show on the sidelines—September Selection—for Shaw to see what he was missing out on and start aggressively rehabbing his knees to get back into the ring as soon as possible, he said.

“I remember sitting and watching September Selection and instantly feeling down about my injury; it was the first show I missed in eight years. After seeing that awesome show I decided that getting back into that ring was priority number one.”

Shaw began testing his knees with light squats and leg presses as well as low-impact exercises like cycling to get them back in working order. Having shaken off his physical ailments in time for the aptly-named Last Chance there was only a mental hurdle left on Shaw’s road to recovery.

Once he walked through the curtain at the Mt Albert War Memorial Hall and it was clear the IPW audience remembered who he was, that mental hurdle was vaulted and it was like Shaw had never left.

Shaw will face The Investment’s Jakob Cross this Saturday at IPW Nightmare B4 Xmas, with the winner advancing to the night’s main event, a Fans Bring the Weapons Match against Travis Banks.

The winner of the night’s main event will undoubtedly put themselves into title contention for Fury’s IPW Championship in the new year, a position Shaw says he is certain he will be in.

“I am promising everyone right now that I will become IPW champ next year,” he told NZPWI. “It is so close to me that I can taste it.”