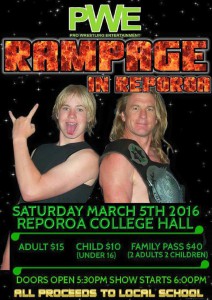 Charlie Roberts is looking to stamp another “R” on Rampage in Reporoa tonight: “Rodeo”.

Roberts, in his first PWE appearance, challenges Stix for the PWE Northland Championship.

Local media coverage of the event has been heavily centred on Stix, the second titleholder in PWE’s short history. Anything less than a definitive win for the “Rumbling Rocker” will be seen as a disappointment for the Reporoa crowd.

Win or lose, it’s an historic night for Roberts. Once the bell sounds for his PWE Northland Championship match at “Rodeo in Reporoa”, Roberts will have wrestled for every active pro-wrestling promotion in New Zealand as of press time.

The Rodeo Drive leader is hoping to combine two milestones for a night he won’t soon forget.

“What better way to celebrate becoming the first New Zealand wrestler to work for every active promotion than by claiming that PWE title?” he asked. “PWE better start engraving it now.”

In addition to the PWE Northland Championship, Rampage in Reporoa will host matches for two new titles.

“Rufguts” Roddy Gunn and Tank will battle for the Anzac Championship, a title PWE management says “can be fought for on both sides of the Tasman”.

PWE Rampage in Reporoa takes place today, March 5, at Reporoa College. Doors open at 5.30pm with the first match scheduled for 6pm. Tickets are available on the door ($15 adults, $10 children, $40 family). The card, subject to change, is listed below.