It turns out New Zealanders can see him.

John Cena will be part of the line-up of WWE Superstars coming to Auckland’s Vector Arena on Wednesday, August 10.

Since news of WWE’s return to New Zealand first broke, many fans have been clamouring for a Cena appearance.

As confirmed earlier today by Cena himself, the 15-time world champ will be in action this August. 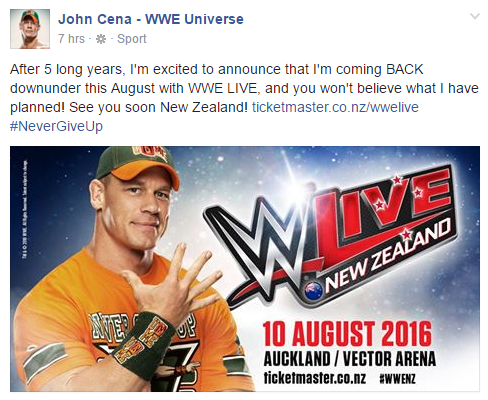 “After 5 long years I’m excited to announce that I’m coming BACK downunder this August with WWE LIVE, and you won’t believe what I have planned!” Cena wrote. “See you soon New Zealand!”

Cena defended the WWE Championship against R-Truth in the main event of WWE’s last live event in New Zealand in July 2011.