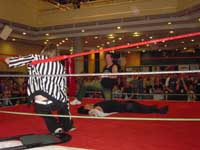 Impact Pro Wrestling made their much awaited debut at the Armageddon Expo today at the Aotea Centre. Putting on four shows consisting of 11 matches, IPW wowed the crowds and earned new fans as the stars put their bodies on the line.

The final show of the day saw Jarvis Solid defeat Mr. Showtime to win the number one contendership – the victory will see him take on “Double D” Davey Deluxeo in the main event of Monday’s show.