After years of behind the scenes planning by all involved, NZPWI can today exclusively announce that the stars of WWE SmackDown™ will invade the Westpac Stadium in Wellington on Saturday, March 4 as Dainty Consolidated Entertainment presents the “SmackDown Road to WrestleMania 22™ Tour”!

In what will be the first ever WWE live event to take place in New Zealand, up to 30,000 fans are expected to jam the stadium in what is to be a show of epic proportions!

Not only will the stars be building up to WrestleMania 22 (the biggest event of the year scheduled for April 2), but the WWE will be coming out with all guns blazing to put on a great stadium show with pyro, big screens and their biggest names as WWE arrives in New Zealand for the first of what we hope to be many tours. 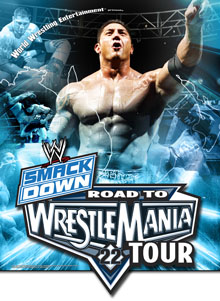 Westpac Stadium Marketing Manager Steven Thompson told NZPWI that the arrival of WWE in New Zealand has been the result of three years of patient negotiations. “We have wanted to host WWE ever since the success of the ‘Global Warning Tour’ at the Melbourne Telstra Dome in 2002,” said Steven.

“Like many kiwis I have been a closet wrestling fan since as a kid watching Ernie Lennard’s ‘On the Mat’ show in the 1970s. Since then I have been to the recent WWE shows in Sydney and can’t wait until the first of the WWE superstars climb into the ring at Westpac Stadium,” says Steven.

“Having seen the initial stage and ring plans, it will be a night of entertainment that New Zealand will not forget for a long time.”

You will be in first for tickets!

NZPWI visitors will get the first opportunity to purchase tickets for the event, as they are part of a selected group who will have access to an exclusive “pre-sale” in a little over one week. Full ticketing prices and on sale dates will be made available within the next week.

NZPWI is the official “online portal” of information regarding the tour, with official news and information being “first run” at NZPWI.co.nz before mainstream media.

More details regarding the tour will be released over the coming days, weeks and months – and NZPWI is your source for getting the low down fast! Check back often as we release more details in our official SmackDown Road to WrestleMania 22™ tour section.