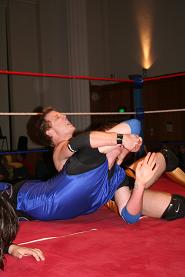 They call him the Peak of Perfection, one half of the reigning NZWPW Tag Team Champions, Travis Banks. He’s a nominee in the 2009 People’s Choice Awards for wrestler of the year – and debutant. Travis has only been wrestling since March of 2009, but he’s already proven himself to be one of the most exciting members of the NZWPW roster, and definitely one to watch in 2010.

“Professional wrestling has always been my first and foremost passion,” says Travis. “I remember when I was a little kid watching wrestling. I wanted to do it. When I was at UCOL everyday I wished I was wrestling. Then I went to Australia, and for some reason I just thought I couldn’t waste any more time – I need to do this now!”

Travis got in contact with NZWPW and Martin Stirling, who invited him to come and train. It was a big move to the Wellington region from his hometown of Palmerston North, but Banks put it all on the line to pursue his dream, and was soon making his debut at Heretaunga Hellfire against fellow debutant The Nerd.

Banks won his debut match with a unique version of a crossface he calls the Lion Clutch. Named partially in tribute to Chris Jericho (one of Travis’ wrestling heroes) and in part for the intensity with which he applies the hold, the Lion Clutch has led Banks to several victories.

Not only does Banks employ a unique finishing move, but his technically sound style of wrestling sets him apart from the rest of NZWPW. In a roster filled with brawlers like Dan “The Man” Stirling, high-flyers like JC Star and all-rounders like D-Hoya, Banks’ unique blend of submission wrestling, technical suplexes and the occasional hard-hitting knee means his opponents can never quite predict what he’ll come at them with next, and has led him to several wins in his rookie year.

“I don’t want to stick to any one style,” says Travis, “I want to be as diverse as I can. My main influences are Chris Benoit, Dean Malenko, Dynamite Kid, the original Tiger Mask, AJ Styles, KENTA from Japan. The athleticism and the hard work those guys put into their matches make them more enjoyable than others.”

Another wrestler with a similar style to Banks’ heroes is Lance Storm. Now retired from the ring, Lance runs the Storm Wrestling Academy in Calgary, Alberta, Canada where he takes in wrestlers from around the world for a three-month-long training camp. Wrestlers which will soon include Travis Banks.

“I thought [the Storm Wrestling Academy] would be perfect for me, as he has that technical style that I like,” says Travis. “That and he was trained in the Harts’ training camp and has been to the Dungeon.”

So, early into his career, Travis sent Lance Storm an e-mail enquiring about the possibility of training under the former WWE Intercontinental Champion.

“Within a day or two he e-mailed back asking about my sporting background and whether I had any matches he could watch, so I sent him a link to my matches—I think I had only had three at the time—and assured him that I was very physically active, and within a few days he e-mailed me again to say that he would be happy to accept me into his academy,” says Travis.

Banks isn’t wrong to claim that he’s physically active. Wrestling with NZWPW and training under its owner, Martin Stirling, has given Travis the opportunity to branch out into other combat sports, namely sumo wrestling. In May of 2009, Travis ventured to Surfer’s Paradise where he won a silver medal as a lightweight at the Oceania Sumo Championship, before claiming a gold medal in the teams event alongside fellow NZWPW wrestler Tykade.

With elements of sumo creeping into his already diverse arsenal, Banks began to rise through the ranks in NZWPW, either forcing his opponents to submit or being cheated out of hard-fought wins against devious rivals like “Dream Catcher” Phil Woodgate. However, thanks to a clear dedication to wrestling, Travis was given a chance to shine and entered into the prestigious Right 2 Challenge match at the NZWPW event of the same name after wrestling only eight matches.

“In 2008 I was in the crowd at the Raven Show [AWF Pro-Wrestling Explosion]  and I remember thinking how I would love to be a wrestler and come back to my hometown of Palmerston North to wrestle,” says Travis. And sure enough, when the NZWPW Right 2 Challenge was held at the Queen Elizabeth College in Palmerston North, Banks was given the opportunity to live one of his dreams in what he considers his best match to date.

Although Travis didn’t leave Palmerston North with the Right 2 Challenge (the match was eventually won by Rufguts when he pinned JC Star) the match laid the groundwork for something much more exciting – forming a tag team with JC Star.

“When I first started training in NZWPW there were a fair few guys I looked up to and sort of just watched and copied and learned from them,” says Banks. “JC Star was one of them. He was main-eventing the shows and I was watching from the back wondering what I had to do to be that good. So I just trained as hard as I could, and one day he just came up to me and said we were going to be a tag team. I was a little shocked at first because, well, here comes this main event player, and he’s wanting to team with me!”

Travis’ modest attitude and willingness to learn from JC led him to success at The Bay Bash when he and Star, the Five Star Revolution, made their way through three tag teams in one night to become the new NZWPW Tag Team Champions, retiring Adam Avalanche in the process.

Still holding the NZWPW Tag Team Championship as of today, Banks hopes to have raised enough money to take Lance Storm up on his offer and train at the Storm Wrestling Academy by the end of 2011, but has no plans for the immediate future.

“Hopefully [JC Star and I] can continue to entertain the crowds,” says Travis. “I’m looking to gain as much experience as I can before I head to Canada. Hopefully I can wow the Canadians over there, but yeah… I’m just looking to keep at it over here and hopefully have a bit of fun in the process.”