SCW: Rufguts returns for Brawl in the Hall 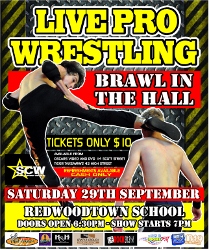 Former NZWPW Champion “Rufguts” Roddy Gunn looks to get back in title contention, this time going after the SCW Championship, when he meets Storm Wrestling Academy graduate Sammy V at SCW Brawl in the Hall.

Gunn, who has moved in and out of retirement over the course of 2012, will be hoping to build on his win over Taylor Adams at NZWPW Right 2 Challenge and knock off another young lion in Sammy V on his way to holding another New Zealand championship.

Sammy V will be anything but easy for Rufguts to overcome though. Sammy is one of only three Storm Wrestling Academy graduates in New Zealand, having trained under former WWE, WCW and ECW star Lance Storm.

Will “Rufguts” Roddy Gunn start the first part of his journey to the SCW Championship in this number one contender’s match on Saturday, or will Sammy V put Gunn back into retirement as he moves on to a shot at the title?

The SCW Championship itself will be decided at Brawl in the Hall when current champ “Lethal” Lazza Stevens puts the belt on the line against Christchurch’s Matt Mackay.

Stevens agreed to a title match in order to get his hands on Mackay, who attacked him on behalf of SCW’s commissioner during a title match at Marlborough Mayhem.

Will Stevens be able to get the Lethal Lock on Mackay and show him what happens when you cross the SCW Champion, or could Mackay pull off an upset in his first official match with SCW and become the promotion’s champion himself?

Cross was pinned by D-Mack at his last SCW show. Will D-Mack find a way to score the upset victory again, or will Cross make an example of the young fan-favourite?

SCW Brawl in the Hall takes place this Saturday, September 29, at Redwoodtown School, Cleghorn Street, Blenheim. Doors open at 6.30pm with the show starting at 7pm. Tickets are available on the door at a cost of $10. The card, subject to change, is listed below.