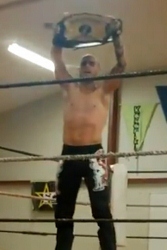 SCW Champion “Lethal” Lazza Stevens passed his biggest test yet when he defeated “Rufguts” Roddy Gunn to retain his title in the main event of Slam City 3 on Saturday.

Stevens quickly found out he could not match Gunn’s power as the bout began, but used his speed advantage to keep Rufguts on his toes.

Rufguts bent the rules to take control of the contest when he grounded Stevens following a suicide dive and took some liberties with the SCW Champion, choking Stevens with his wrist-tape behind the referee’s back.

Gunn continued to fish-hook at Stevens’ face and began to demonstrate his power when he drove “Lethal” Lazza to the mat with a wheelbarrow suplex.

The tide turned for Rufguts when Stevens was able to backdrop his much larger opponent to escape a powerbomb, and instantly went on the attack with two splashes in the corner.

Stevens flew off the top rope with a missile dropkick and attempted to apply his signature Lethal Lock to Rufguts.
Gunn, however, rolled through to force Stevens to break the hold or risk being pinned before bundling the SCW Champion up and drilling him to the mat with a Rufdriver.

Surprisingly Stevens was able to kick out of the move Gunn has relied on to put so many people away.

Rufguts attempted to connect with another Rufdriver only to be roundhouse kicked to his knees by Stevens, who then snagged Gunn’s arm and applied the Lethal Lock.

Gunn tried to make it to the ropes but Stevens rolled him back to the centre of the ring – leaving Rufguts with no option but to tap out.

Stevens’ next SCW Championship defense will be against the man he defeated to become champion, Sammy V, following Sammy’s triple threat victory earlier in the night.

D-Mack and Justice Sharpe formed a temporary alliance to try and take care of the Storm Wrestling Academy graduate but Sammy V could not be kept down.

When things broke down between D-Mack and Sharpe it appeared as though Sharpe would take out the match with a Boston crab on his former ally.

Sammy V quickly broke up the submission with a running boot to the head before crushing both his opponents in the corner with a giant splash.

As D-Mack and Justice Sharpe staggered out of the corner, Sammy V hurtled towards them and took down both men with a spear tackle.

He then covered both at the same time for an emphatic victory to become the new number one contender to the SCW Championship.

Marcus Kool had his hands full with former trainee T-Rex, who took just about everything Kool could dish out, including an inverted double-underhook facebuster.

Kool attempted to keep his momentum high and finish T-Rex with a superkick but T-Rex caught the knockout shot and swung Kool to the mat with a spinning side slam for a near fall.

T-Rex began to argue with the referee, feeling he should have won the match, which allowed Kool to trip his trainee to the ropes and take him out with a 619.

With the crowd behind him, Kool again called for a superkick and this time successfully connected with the move to put T-Rex down for the three-count.