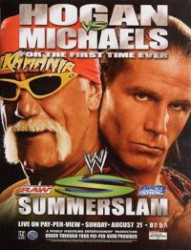 Seeing as we are still basking in the SummerSlam twilight, this week’s Throwback Thursday takes us back to the 2005 edition of the annual summer spectacular. The event occurred during the midst of what has come to be known as the Ruthless Aggression Era and, as a result, has some fantastic technical wrestling matches.

Speaking of fantastic technical wrestling, I actually felt a little bit cheated by the first match when Chris Benoit forced Orlando Jordan to tap out in a mere 20 seconds. However, a new US Champion was crowned and we moved to the next match.

The next match was one of the two most controversial rivalries at the event. Prior to the show, Matt Hardy, Lita, and Edge had a storied history that saw lines blur between reality and entertainment. While books could be written about their entire history, this is not a place for such details.

Like the first match, this was unfortunately short. The match started out as a simple brawl and, really, did not change. However, only a few minutes into the match, Matt Hardy got dropped headfirst onto the top of the turnbuckle. As a result, Hardy donned the proverbial crimson mask which was practically a bullseye to the animalistic Edge. After another minute or so of being pummeled and kicked in the face, the referee was forced to stop the match and award Edge the de facto victory.

The following match was the second of those controversial rivalries mentioned above. As Michael Cole put it, “the future of a child literally hangs in the balance” when Eddie Guerrero faced Rey Mysterio in a ladder match for the custody of Eddie’s supposedly biological son, Dominick. While this feud produced incredible technical matches between the two, including this one, the angle just left a bad taste in the mouth of anyone who witnessed it.

However, there was some light at the end of the tunnel. Disgusted by her husband’s actions, Vickie Guerrero would push Eddie off of the ladder and then hold him down allowing Mysterio to score an emotional victory.

After these emotionally fueled matches, we were treated to a quick tap out victory for Kurt Angle over Eugene. This wacky match would be followed by one of the supernatural kind. The Undertaker fought Randy Orton in a clinic of a match for nearly 20 minutes. The finish would come when Orton’s father and WWE legend “Cowboy” Bob Orton interfered and distracted The Deadman long enough for the Legend Killer to hit a big RKO for the pinfall.

The sixth match on the card was the first of the three main events. In one corner, the reigning and defending WWE Champion: John Cena. In the other corner, the man hand-picked to take that championship: Chris Jericho. Although the match was by no means as long as it could have been—who couldn’t watch a 60 minute ironman match between these two?—the two were truly impressive and the crowd was eating it up. In the end, Cena overcame a devastatingly long Walls of Jericho submission before hitting a tilt-a-whirl version of the FU—as it was then known—for the 1-2-3.

It was then time for the SmackDown portion of the main event scene. In his hometown of Washington DC, Batista defended his World Heavyweight Championship against the “Wrestling God” JBL and a No Holds Barred match. This was not a match that you would call a ‘mat classic’ by any stretch of the imagination; this was a brawl, this was aggression, this was a fight. The ending was reminiscent of the entire match: Batista kicked out after a Clothesline from Hell; he then hit his spinebuster followed by a Batista Bomb; he then delivered a second Batista Bomb on top of the steel stairs. It wasn’t pretty, but it got the job done and Batista walked away still the World Heavyweight Champion.

The final match of the evening was one of the biggest matches of all time. It wasn’t about championship gold, it wasn’t about moving up in the company, the match was about finding out which legend was the best. It was Mr WrestleMania facing off against Hulkamania, The Heartbreak Kid battling Hollywood, Shawn Michaels in a war of generations with Hulk Hogan.

SummerSlam would end with a repentant Michaels offering his hand to Hogan. The two would shake, Michaels would leave, and Hogan would celebrate with the fans. It was a great sight to end one of the greatest SummerSlams of all time.

It’s about that time again, your weekly dose of wrestling’s past: Throwback Thursday. As it turns out, the 28th of...

WWE's biggest event of the American summer is behind us – what sort of legacy did this year's SummerSlam leave...