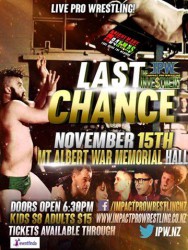 Pat Schisk was at his lowest point when he was forced out of The Investment in September.

Chaos had been given a bye in the semi-final stage of the tournament thanks to IPW Director and Investment mastermind Daniel Burnell but even with the deck stacked against him, Schisk finished Chaos with his Wakado Sick Kick to claim the Armageddon Cup.

Schisk now finds himself in a position to complete his dream run back to the main event picture and dethrone Fury for the IPW Championship in the ultimate act of revenge.

However, defeating Fury is easier said than done.

Can Schisk make Daniel Burnell rue the day he decided to turf “Classic” Pat out of The Investment, or will Fury ensure he sees out the year as IPW Champion and carries the title into Nightmare Before Xmas?

Also at Last Chance, Australia’s Mr Juicy makes his New Zealand debut to lend a hand to Travis Banks in his battle against The Agents of Change.

Mr Juicy has been a standout in the Australian wrestling scene for a number of years – perhaps none moreso than 2014 when he was ranked 496th in Pro Wrestling Illustrated’s annual PWI 500 list.

With that in mind, Banks contacted Mr Juicy earlier this month to entice him to Auckland.

Banks has a good track record working with international stars against The Investment, having defeated Aaron Henry and Fury alongside “Hacksaw” Jim Duggan at the Armageddon Expo last month.

Can the first-time pairing of singles standouts Mr Juicy and Travis Banks topple The Agents of Change, or will the former two-time IPW Tag Team Champions prove the better men when it comes to tag team competition?