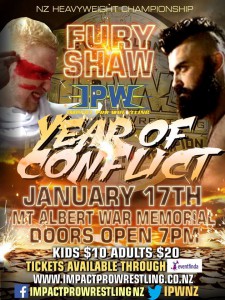 James Shaw hopes to start the year off with a bang when he challenges IPW Champion Fury for the title at IPW’s first event of 2015, Year of Conflict.

A perennial contender to the IPW Championship, Shaw has been in pursuit of the title since the promotion’s relaunch in 2013.

The fan-favourite spent much of that year locked in a bitter feud with Vinny Dunn over the title, where he was often cheated out of a victory by Investment head Daniel Burnell (who will likely be in Fury’s corner for tomorrow’s title defense).

After an up-and-down 2014—plagued by knee injuries—Shaw earned another opportunity to become IPW Champion following a hard-fought victory over The Investment’s Jakob Cross at Nightmare B4 Xmas last month to establish himself as the number one contender yet again.

An emotional Shaw addressed the audience after his victory at Nightmare.

“I promise you this,” he said. “We are going to become New Zealand wrestling champion!”

Despite all the fan support coming Shaw’s way, Fury could easily be the toughest challenge Shaw has faced to date.

Fury has turned back challenges from former IPW Champion Travis Banks, Pat Schisk, and Shaw’s Origin stablemate Alfred Valentine since winning the title in July 2014, en route to having one of the most memorable title reigns in IPW history.

Can Shaw finally overcome the odds and claim the IPW Championship after years of trying, or will Fury add Shaw to the long list of names he’s beaten and add a sixth month to his IPW Championship reign? Get the answers tomorrow night at Year of Conflict.

IPW Year of Conflict takes place tomorrow, January 17, at the Mt Albert War Memorial Hall. The card, subject to change, is listed below.