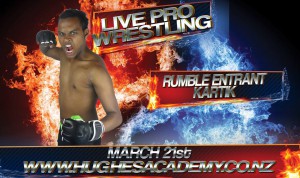 “The Neo Viper” Kartik has emerged as the next challenger to Charlie Roberts’ Hughes Academy Championship after winning a 27-person Inter-Promotional Rumble at yesterday’s Live Pro Wrestling event in Auckland.

The match, featuring wrestlers from all over New Zealand, came down to just Kartik and Kenith, who had wrestled a singles bout earlier in the evening.

Kenith’s manager, Tabitha, had been barred from ringside for their one-on-one encounter, but showed up anyway while the referee was distracted to help her man secure the win with a low-blow.

Kartik was able to get a measure of revenge against Kenith when he tossed the cocky newcomer over the top rope to eliminate him from the Inter-Promotional Rumble and win the high-stakes bout that had also featured the likes of Jackson Shield holder Kingston Eclipse, KPW Women’s Champion Frankie Quinn, Hughes Academy head trainer Graham Hughes, and He Toa Cup Champion Chad Howard.

Kartik’s win entitles him to a match for the Hughes Academy Championship. He and Charlie Roberts will meet with the title on the line at the next Live Pro Wrestling event on May 2.

Charlie Roberts was also in action at yesterday’s Live Pro Wrestling event, issuing an open challenge that was answered by his former tag team partner “The Natural” Steve Jordan.

NZPWI had speculated Jordan may do well in the Inter-Promotional Rumble thanks to his connection to Rodeo Drive, but the former KPW Tag Team Champion was keen to prove himself against the man he held the titles with, instead of reuniting with Roberts.

Roberts accepted Jordan’s offer to face him, and the two wrestled a back-and-forth bout until the Rodeo Drive kingpin decided to take the easy way out and blasted Jordan with his Hughes Academy Championship bout behind the referee’s back for a tainted victory.