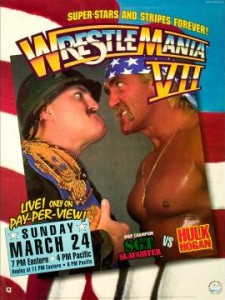 While there are many noteworthy moments from this day throughout much of professional wrestling’s history, we will move to our final origin story on our road to WrestleMania. As we build towards the grandaddy of ‘em all, we have a look at this year’s WrestleMania card before rewinding to the genesis of some of this year’s main
acts. This week we look to the man who not only defines the event, but who beat Mr WrestleMania. Throughout two decades, this man would be given a slew of epithets: The Deadman, The Lord of Darkness, The American Bad-Ass, and a man who many consider a cornerstone of the WWE. Today we look back to WrestleMania VII and the beginning of the greatest streak in all of sports and entertainment, the first WrestleMania for the man known as ‘The Phenom’ The Undertaker.

The quick results are as follows: The Rockers defeated The Barbarian and Haku (with Bobby Heenan); The Texas Tornado defeated Dino Bravo (with Jimmy Hart); The British Bulldog defeated The Warlord (with Slick); The Nasty Boys (with Jimmy Hart) defeated The Hart Foundation to win the WWF Tag Team Championship; Jake Roberts defeated Rick Martel in a blindfold match; The Undertaker (with Paul Bearer) defeated Jimmy Snuka to begin his undefeated WrestleMania streak; The Ultimate Warrior defeated Randy Savage (with Queen Sherri) in a retirement match; Genichiro Tenryu and Koji Kitao defeated Demolition (with Mr Fuji); Big Boss Man (with Andre the Giant) defeated Mr Perfect (with Bobby Heenan) by disqualification resulting in Perfect retaining the Intercontinental Championship; Earthquake (with Jimmy Hart) defeated Greg Valentine; The Legion of Doom defeated Power and Glory (with Slick) in a one minute match; Virgil (with Roddy Piper) defeated Ted DiBiase by count out; The Mountie (with Jimmy Hart) defeated Tito Santana; and finally, Hulk Hogan defeated Sgt Slaughter (with General Adnan) to become the WWF Champion for the third time.

Just to quickly recap my thoughts on the event as a whole, this was almost an entirely missable event. While there were plenty of matches that seemed to mean something, there was only one that was actually a great match: Warrior vs Savage. These two put on one hell of a showing and the end created something that is still considered a WrestleMania moment to this very day: the reuniting of Randy Savage and Miss Elizabeth. That match alone is definitely worth watching.

Alas, the same does not ring true for the WrestleMania debut of The Phenom. If this match was not the debut of the greatest streak in sports and entertainment history, it would have been entirely forgotten the moment it ended. The fact that it was between two of WWE’s greats is proof that anybody can have a bad match.

I would love to say something positive about it—that maybe there was a good moment or a good finish or a good entrance—but I really have nothing positive to say. I apologise if I’m coming across as a bit of a doppelgänger, but the match was a complete laughing stock. Undertaker had yet to turn his character into himself, Bearer—may he rest in peace—was nothing more than a cheesy, chubby ghoul of a man, and Snuka managed to get in none of the highflying wrestling he has come to be known for pioneering.