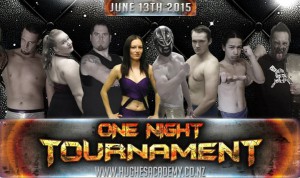 Frankie Quinn has scored one of the biggest victories of her career, winning the Hughes Academy Tournament at Saturday’s Live Pro Wrestling event.

Quinn bested old rival Krystal Kayne in the opening round of the tournament and advanced to face Kauri Walker in the semi-finals.

The former KPW Women’s Champion made it past Walker thanks to a low-blow, and moved on to the tournament final against El Oro Maximo, who upset Hughes Academy Champion Charlie Roberts in his semi-final match.

Quinn dodged an elbow drop from the high-flying luchador and followed up with an X-factor to claim the Hughes Academy Trophy in the third-annual tournament, adding her name to the elite list of winners that also includes Shane Sinclair and Marcus Kool.

After being knocked out of the tournament in the first match of the night, Krystal Kayne challenged Tabitha for the Hughes Academy Women’s Championship.

Kayne looked as though she would have been able to win the title until interference from Kenith ensured his partner, Tabitha, retained.

Kenith received his comeuppance in the main event of the evening, a Tables Match against Kartik.

The Neo Viper took the fight to Kenith all over the Kelston Community Centre and eventually baited Kenith into attempting a shooting star press. Kartik rolled away from Kenith’s airborne attack then slammed Tabitha to the mat with an STO to prevent her from interfering.

Kartik lined up a spear for Kenith and smashed his rival through a table that had been set up in the corner to win the hotly-anticipated bout.