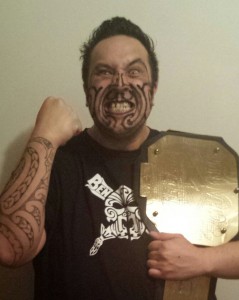 He expected to go one-on-one with James Shaw but now Ben Mana must defend the NZWPW Championship in a fatal four-way this Friday.

NZPWI reached out to Ben Mana for his thoughts on Woodgate’s announcement:

Does this worry me? Kaore! If anything I need to up the ante to prove to everyone in Aotearoa and also myself that I am a true fighting champion … Bring the true number one contender, James Shaw. Bring the volatile ‘Rufguts’ Roddy Gunn. Bring Chad Howard and his Right 2 Challenge contract. Hell, bring an entire army! Because this one-man Maori Battalion is going to send you all home empty handed and stand proud at the end of the night still your NZWPW Heavyweight Champion!