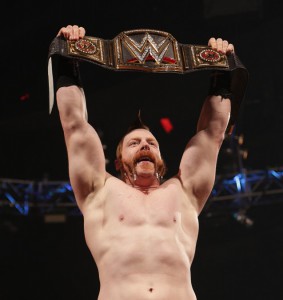 Sheamus cashed in his Money in the Bank contract and won the WWE World Heavyweight Championship in the final moments of Monday’s Survivor Series.

He stayed in the locker-room at the Philips Arena for an hour after the event had ended, contemplating his fourth world title reign, before embarking on a four-and-a-half hour drive – championship belt in the passenger seat – to Nashville for WWE Raw.

The new champ spoke to reporters during a conference call on Tuesday morning, New Zealand time.

“As far as pressure goes, no doubt about it, there’s always pressure but I actually look forward to that,” he said. “The opportunity I have right now is one I’ve been waiting for for a long time. I’m in a different part of my career now, I’m six years in, I’m a different person. When I first came into WWE I was like a deer in the headlights, everything had happened so quickly. I was in there with Cena and Orton and Triple H. I was learning on the fly, I was taking it all in, and there was a huge amount of pressure back then. Right now I’m much more comfortable where I’m at. I know what I’m doing. I waited for this opportunity for so long and I’m not going to let it pass me by.”

Faith in your ability to reach the top is crucial in WWE but, even for a former three-time titleholder like Sheamus, doubts can creep in. His Survivor Series victory confirmed the Celtic Warrior is the current face of WWE but there was a time when Sheamus wondered if he mightn’t get a chance to redeem his Money in the Bank contract for WWE’s biggest prize.

“I’d be lying if I said that didn’t go through my mind – we’re all human beings at the end of the day and sometimes when things aren’t going your way you can have doubts about what you’re doing,” Sheamus revealed. “Will I end up on the side of the guys who haven’t captured the WWE World Heavyweight Championship? But no, you have to believe in yourself. I’ve always believed in myself and the fact I was going to walk away WWE World Heavyweight Champion.”

Sheamus’ victory is further proof of an Irish invasion happening in the world of combat sports. From UFC featherweight champ Connor McGregor to Becky Lynch and NXT titleholder Finn Balor – who Sheamus mentioned many times during Tuesday’s call, and tipped as a future WWE World Heavyweight Champion – the fighting Irish are taking over.

“Pound-for-pound, the Irish are the greatest fighters on the planet,” Sheamus said. “Finn Balor and myself were on the European tour for the first week. We wrestled each other from Dublin all the way to Leeds and, I tell you, it was off the charts. The matches we had were off the charts and it really inspired me again. It’s amazing being in there with such a talented Superstar and there’s no doubt about it, the future of the Irish is great. Finn Balor as NXT Champion – he’s the flagship Superstar of that promotion and he is going to be, as far as I’m concerned, a future WWE World Heavyweight Champion.” 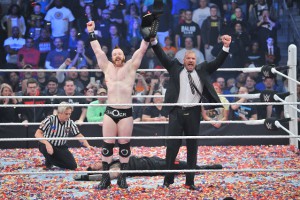 Balor has received almost universal acclaim since his arrival in WWE. The reaction Sheamus gets is more akin to that of Conor McGregor – polarizing audiences around the world while being embraced with feverish enthusiasm by the Irish. Support from the WWE Universe would be nice but, according to Sheamus, getting a reaction – positive or negative – is all that matters.

“If you stand there and analyze every single thing a person is saying, you’ll go mad,” Sheamus said. “You would absolutely lose your mind. Social media is a great tool, but it can also be a negative tool depending on how you use it. Some of the comments I read on Twitter were absolutely hilarious. I’m laughing now because I know I’m in a different place. The only opinion that really matters is my own. I’m my own biggest critic regardless of what anyone else thinks … it’s about reaction.

“It’s about going out there and getting a reaction. I always get a reaction, whether it’s in a match or to boos or cheers. It’s that the people are mostly invested, that’s all that matters. I know they are. I read stuff that they are, but you have confidence in who you are and what you do. I have the utmost confidence in my own ability, of who I am and what I’m capable of. Social media, it can eat some people up. It pops me when I read people’s stuff, especially on Instagram. It’s great. It just means I’m doing my job, and I’m doing it well because I’m getting under people’s skin and antagonizing them. To me, that’s what I’m here to do.”

Audience reactions have been varied throughout Sheamus’ six years with WWE. The Celtic Warrior was met with a chorus of boos when he defeated Daniel Bryan in 18 seconds at WrestleMania 28, cheered as United States Champion in 2014, and subjected to chants of “You look stupid!” when he returned from surgery sporting his current look in March.

Despite the polarizing reactions to his appearance, and a discussion with King Barrett and William Regal on WWE Network’s Table for 3, Sheamus told NZPWI he won’t be changing his look any time soon.

“I think I’m a very handsome man right now, I think I’m probably the best-looking man in WWE to be honest,” he said jokingly. “Great hairstyle, amazing beads hanging off me beard. I’m a poster-boy. I should be on [the cover of] Men’s Health. My poster’s probably up on every woman’s wall in the world. I wouldn’t be surprised.”

“I changed the look because I wanted to do something a bit more drastic,” he continued. “I felt the old look was a bit stale but right now I feel very comfortable in my own skin … It’s very important to continuously change your look and update yourself, keep it fresh. Especially with the way social media is. People have so much access to content now that new things can become outdated pretty quick, but I’m happy with the way I look and I’m happy with my attitude and persona. I’m going to hang on to this for a while.”