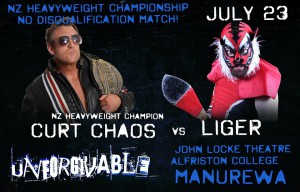 Liger wanted to fight, but Curt Chaos opted for flight – an unforgivable action last month according to the Strong Style Samoan.

Now, Liger challenges Chaos to a no disqualification rematch for the IPW Championship this Saturday, July 23, in the main event of IPW Unforgivable.

“Man, you can wrap those brass knux in gold, tin foil, platinum, any kind of metal you want, because I will be testing your mettle.”

Liger took Chaos to the brink of defeat in a hard-hitting battle at IPW Fight or Flight last month. Feeling the IPW Championship slipping from him, Chaos opted for a disqualification loss and clocked Liger with his brass knuckles.

The champion’s advantage—that he must be pinned or made to submit in order to lose the title—has long been a place of refuge for Chaos.

The IPW Champion has held the title for 105 days by any means necessary.

But once the bell sounds at Unforgivable, it’ll be anything goes with no easy way out.

Chaos will have to stare across the ring at Liger, the 120kg challenger armed with a mean-streak at the best of times, who now has something to be mad about. And a (now perfectly legal) kilikiti bat.

Despite being backed into a corner, Chaos remains confident. The champ claims any physical disadvantages he may face can be overcome in a cerebral battle.

IPW Unforgivable takes place Saturday, July 23, at Alfriston College in Manurewa, Auckland. Doors open at 6.30pm with the first match scheduled for 7pm. Tickets are available on the door ($15 for adults, $10 for children). The card, subject to change, is listed below.