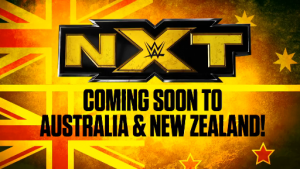 WWE NXT is coming to Australia and New Zealand.

Dates and venues for the events have yet to be announced.

WWE NXT has expanded to hold events all over the globe since its creation in 2012. NXT has visited the United Kingdom as a standalone touring brand, and will hold events in Canada next month.

Several members of the NXT roster are Australian, including Billie Kay, Murphy, Peyton Royce, and TM61.

The Future is NOW! @WWENXT is coming to Australia & New Zealand – Register your interest at https://t.co/MfCHQFbzzO pic.twitter.com/PdtX1ZdyWF

Dakota Kai to Mai FM: ‘It’s about time New Zealand gets some gold’