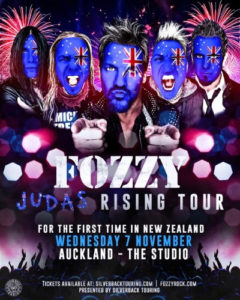 The heavy metal rockers will play Auckland’s Studio The Venue this Wednesday, November 7, as part of the Judas Rising Tour.

Aside from the obvious Jericho-as-frontman connection, Fozzy has a long relationship with pro-wrestling. Most recently, WWE featured “Painless” from the Judas album as one of the themes for NXT TakeOver: Chicago 2018. Jericho uses “Judas” as his entrance music in New Japan Pro-Wrestling (NJPW).

Fozzy has spent much of 2018 performing the Judas Rising Tour around the United States. After Auckland, the tour continues with four dates in Australia before concluding in Canada.

Wednesday marks Fozzy’s first show in New Zealand, and Jericho’s first time back in the country since wrestling Finn Bálor at WWE Live 2016.

Limited tickets for the Judas Rising Tour are still available. Visit bit.ly/fozzyipw for a discounted rate of $45 NZD in association with Impact Pro Wrestling.

Fozzy also offers a VIP Package for $150 USD (which does not include a ticket to the show) at fozzyrock.com which includes:

A surprise appearance from Jake Hager ended an eventful debut episode of AEW Dynamite. The former Jack Swagger aligned himself...