NZWPW Brooklyn Brawl on April 11 should have been a stellar night for Scarlett. She was set to overcome the odds in a triple threat match against tough competitors, Misty and JPE. Overcome them she did, but not before an injury to her ankle mid-match changed the entire complexion of her night – as well as her near future. For eight minutes she was helped through excruciating pain by something simple, a movie quote from Finding Nemo, that kept repeating in her head – Just keep swimming, just keep swimming.

In her own words, Scarlett gives us an inside look into what happens when you suffer an injury at the worst possible time.

I’ve been damned lucky so far in my wrestling career – no major injuries. My nose got broken during my first two months of training, but that was the worst I’d had. Bruises and bumps are par for the course in any contact sport. And at the grand old age of 37, I know I’m going to heal a lot more slowly than some of my younger counterparts. So I work safe to minimise risks, and wrestle opponents I trust with my well-being.

The last six months, I’ve finally felt like I’m able to do the things I want in the ring. So much of it has been overcoming mental hurdles, rather than physical. Once I finally got to train with the KPW guys, who I trust wholeheartedly, I progressed a lot quicker. And sessions with Graham Hughes from Auckland’s Hughes Academy of Professional Wrestling have made sure what I’m doing, I do safely. I’ve been lucky this year to have some excellent sessions at NZWPW too. 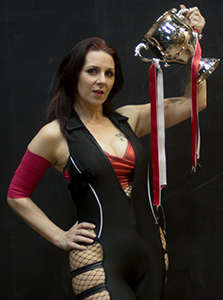 Since she won the KPW Women’s Championship from Nurse Payne in November 2013, Kiwi Pro Wrestling management have graciously allowed Scarlett to pick and choose when she put the title on the line. Working NZWPW’s Brooklyn Brawl show on April 11th was something she’d been looking forward to for months. All three women competing that night shared an enjoyable, sporting rivalry – one where you can take it out on each other in the ring and still have a handshake and hug afterwards.

I’ve put it on the line seven times in five months, in three different cities. I know I’m not the greatest female wrestler in New Zealand, but I’m damned determined and resilient. I can take one hell of a beating and keep going. After all, nothing that’s dished out to me in the ring is ever going to be as painful as a drug-free childbirth.

This night in Brooklyn put that belief to the test.

The triple threat started out fine, both Misty and JPE laying in a few punches and kicks before sending me off the ropes. I ducked under their clotheslines, bounced off the ropes, and took both girls down with a big double clothesline of my own. JPE peeled off to recover in a corner, so I took the opportunity to hit one of my five moves of doom – the Boobsplash. Which, as you can imagine, is jumping up and smashing someone in the face with my boobs. Hey, you use what you’ve got. Or what you’ve padded your bra with.

Normally she’d follow that move with a Mr Perfect-styled snapmare and rolling neckwhip. But after landing back down from the splash, her ankle rolled… and then came the snap with a side of crackle. Pain shot through her foot and encircled the entire ankle.

She had no time to rest and no time to test the damage. JPE was right behind her while Misty recovered rapidly on the other side of the ring. Though to her, something else was a far more important concern.

There was a hall full of people who had paid to watch wrestling, not a middle-aged lady having a cry.

I moved over to Misty and the three or four steps it took to get to her, I thought “OK, maybe this is just a sprain… I’ll be fine”. I sent her into the corner on top of JPE, and ran in to give her a Boobsplash too. When I tried to leap, I had no power in my jump. I knew I was munted. I had a little whisper to the referee, let him know I was hurt… Derby Dan is one hell of a good ref and I’m grateful he was in there. But the conundrum was… this was a match for MY championship. I HAD to win. I went through things in my head… do I tell Misty that I can’t go on, and let her pin me so I can get to hospital? She certainly deserves to be a champion… but what kind of champion would that make me, to just lay down like that? And if I just roll out and stay out of the match, whoever gets the pin gets the title. I just couldn’t do it.

So Scarlett carried on, for more than eight minutes, on what would turn out to be a broken ankle.

I took everything JPE and Misty dished out, and waited for the inevitable – when they’d turn on each other. JPE took the brutal Raging Thunder from Misty and I reversed Misty’s attempt on me into a bridging fisherman’s suplex for the win. Thank God for adrenaline, because I have no idea how I managed to hit a suplex with all of my weight on one foot. Or how I managed to walk through the door into the locker room. I found myself a spot in the corner, while watching it swell up like I’d grown two testicles under my skin.

At the hospital, the ankle fracture was confirmed. Thankfully, the bone hadn’t displaced, which avoided a need for surgery. But the injury still requires weeks in a cast before rehab can begin. In the meantime, she’s had plenty of support.

I have to say a big thank you to the crews from [NZ]WPW and KPW, and my amazing friends (most of whom I met through the NZPWI Forum) that have stepped up to help me out, visited, and sat with me filling in the hours. To say I’m gutted to be injured right now is an understatement. I’d stepped up my wrestling training and have an amazing opportunity to wrestle outside of New Zealand on the horizon… so this is a setback I didn’t have time for. There are some people hoping for me to fail, and give up wrestling entirely. Ain’t gonna happen. I have my “Wrestling Bucket List” with lots of matches I still want to have before I’m done. Frankie Quinn and Krystal Kayne from the Hughes Academy are right at the top of my list. So girls, take note; we’re gonna dance this year, for sure. 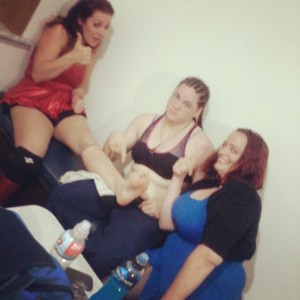 Professional Wrestling Entertainment (PWE) held its first event in Whangarei this past weekend. Homecoming entertained fans at the Kamo War...