Comics based on professional wrestling have generally varied greatly in quality. Usually that quality hovers from “Yeesh, this is… not good” to “I need brain bleach”. Their maligned existence is strange when you think about it, given that sports-entertainment is pretty much exactly like an old-school superhero comic. Good and evil, right and wrong – all contested through punching and gaudy spandex. It should be a match made in heaven.

But writers have struggled with the angle to take on wrestling adventures—Kayfabe it? Show the scripted side? Bizarrely add in supernatural elements and have wrestlers fighting over the fate of the world against demons?—and artists are hindered by that rather large issue of never having any first-hand experience in a ring. 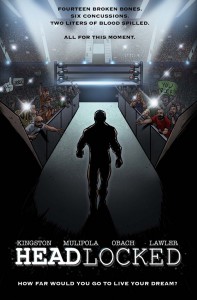 What is refreshingly different about Headlocked: The Last Territory, written by Michael Kingston and illustrated by NZ artist Michel Mulipola, is that the writer has taken his strong storytelling and coupled it with Mulipola – who has the immense benefit of in-ring experience as IPW’s Liger. It’s the only wrestling comic out there that puts you right inside the bizarre world of wrestling.

Headlocked follows the story of Mike Hartmann, a young theatre major who wants nothing more than to be a professional wrestler, but quickly finds himself blackballed from the industry. Hartmann then finds himself with a second chance thanks to returning star Dr Destruction, who takes him under his wing for mysterious reasons. Under a hood, Hartmann gets a second chance to pursue his dream – but nothing ever comes easy in this profession and Hartmann will find himself questioning his passion, as well as his destiny, every step of the way. 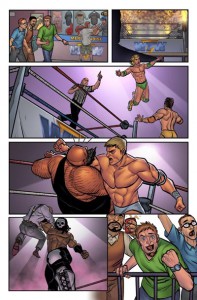 The character of Mike is an interesting one. He begins his journey about as clueless as any person could be. Every time he learns a lesson, he immediately steps right back into trouble. The world is indeed against him but Hartmann doesn’t do himself any favours along the way. It’s one of the things that kept me hooked, as I admired his passion but wanted to see people beat some sense into him. As the series continues, it’ll be interesting to see how he progresses – will he hone his craft and one day become a locker room leader, along with all the glory of being a bona fide superstar? Or will he crash and burn before ever burning bright?

The rest of the cast are fleshed out well, all with their own journeys filtering through the action. From the ring crew, to the lone female wrestler on the roster trying to prove herself, to the journalist ready to take down the seedy side of the wrestling business, we are shown a cast that’s rich and varied. The creative team takes the time to let us get to know these characters, along with making sure they’re all unique in their designs. It’s pleasing to see such a large graphic novel keep such a consistent quality too. The love that Kingston and Mulipola have for the comic, and the business it’s based on, is clear. 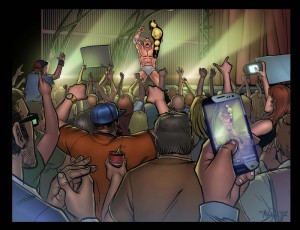 This volume is the second arc, but The Last Territory is the perfect jumping off point. This volume is packed with unique scenes, like learning how hard it is to run the ropes and many other peeks behind the curtain. This is where we get some truly nice moments that other wrestling comics never come close to achieving – or even referencing.

Added to this is the precision in the art; when a wrestler locks up or takes down their opponent, there are things like the correct arm being twisted and many other details that only a trained wrestler can provide. It won’t be noticed consciously by a casual fan, or by those reading about wrestling for the first time, but it adds much appreciated authenticity.

The next volume is currently on Kickstarter, and I imagine anyone who reads The Last Territory will be very interested to continue the journey of Mike Hartmann. If you love good comics and always wished pro wrestling could be effectively merged into that medium, Headlocked is the one you’ve been waiting for. If you wanted to get someone into wrestling who likes comics, this book will also do the trick in piquing their interest.

As the artist himself says, “Headlocked – the ONLY wrestling comic that’s real. Everything else is just fake.”

You can buy a digital or print copy of Headlocked: The Last Territory on their website, by supporting the next volume of Headlocked on Kickstarter or by visiting the Arkham City Comics booth at Auckland Armageddon this weekend – where Michel Mulipola will be selling copies for $40 along with a quick sketch in each book.

Keen on getting more info on Headlocked and artist Michel Mulipola’s journey? Check out his website and then come back to NZPWI this week for an exclusive interview about the comic and his recent trip to San Diego Comic-Con.

Liger wanted to fight, but Curt Chaos opted for flight – an unforgivable action last month according to the Strong...