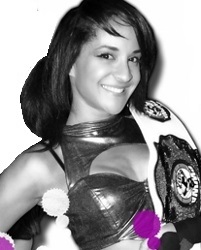 Evie returns to New Zealand as the undisputed PWWA Champion after defeating Madison Eagles in Parramatta, Australia this past weekend.

The 25-year-old pinned Eagles following a double-stomp from the top rope.

“Woke up, and I feel like I walked under a bus, then got hit by a train,” Evie tweeted the day after her hard-hitting title bout.

Eagles attempted to gain an unfair advantage before the Champions United main event, concealing forks and a metal hook in her kneepads until being caught out by the referee.

The PWWA Champion proved to be dangerous with or without foreign objects when she gave Evie an inverted electric chair to the ring apron, leaving the interim champ particularly vulnerable.

Evie stopped Madison’s momentum with a dive from the venue’s stage area, but would take another nasty fall when Eagles countered a springboard attempt with a Yakuza kick, knocking Evie from the top rope to the hardwood floor.

Back in the ring, Eagles attempted to take Evie out with a German suplex from the top rope, but Evie countered and sent Eagles to the mat.

Still on the top rope, Evie dove onto Eagles and drove all her weight onto the champ’s chest with a double-stomp for the win.

After almost a year of debate as to who the true champ was, Evie is now undoubtedly, undisputedly, the PWWA Champion.

Olivia Shaw began the Champions United card in a match against Shazza McKenzie.

Shaw’s top rope moves would not be as successful as Evie’s. Olivia missed with a moonsault which allowed McKenzie to hit her Shaztastic Stunner for the win.

New Zealand-born Storm also made her PWWA debut at Champions United in a losing effort against KC Cassidy.