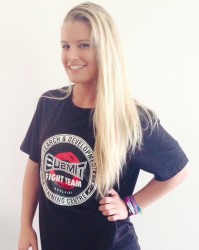 New Zealand-born Storm will be part of a historic match tomorrow night.

Melbourne’s WarZone Wrestling is introducing a brand-new women’s championship, and Storm is one of four women who will vie for the title.

“I’ve wanted to work for WarZone for years, and now I finally get to, and it’s against some of the toughest women in the country,” she said. “I couldn’t be more excited!”

Storm competes against Kellyanne English, Miami, and Savannah Summers in a four-way elimination match at WarZone 20.

“I’ve wrestled against all of them and know their styles quite well,” Storm told NZPWI. “And, of course, I’ve been going to England and learning from some of the best over there so I’m only getting better!

“I’ve also been extensively working on my ninja skills,” she jokes.

Storm’s ninja skills and English expertise are what caught the eye of WarZone promoter Ben Gilbert, helping her to stand out in a competitive Australian women’s wrestling scene, he said.

“However, looking at the four in the ring you have Kellyanne, who has travelled to Canada and Mexico to train and perform. Savannah, who has travelled to the USA to ply her trade and, along with Miami, helped shape the South Australian women’s division. And of course Storm, and her travels to the UK, has brought in such a unique element. All of these together creates a show-stealing match-up.”

“To get the respect the RCW or PWWA women’s titles carry would defiantly be something to aspire to,” he said.

“With all four of the competitors in this match, I think it’s achievable.”

WarZone 20 also features KrackerJak vs. Tyson Gibbs for the WarZone Championship, and WarZone Tag Team Champions Cremator and Mike Burr against Dowie James and The Enforcer in a steel cage match.